1. I’ve always enjoyed Matt’s ‘filtered for’ posts, but I especially enjoyed this turn of phrase:

Computer chip architecture is about the regulated control of information. The design never anticipated that unregulated information – time – would be brought in from the outside.

2. In the same post Matt linked to System Bus Radio — turning a computer without any radio hardware into an AM transmitter by hitting the RAM fast enough you “carve radio waves into the air”. Useful should you want to exfiltrate data out of an air-gapped machine.

This reminded me of a tale told to me by the radio engineers when I used to work at the BBC. They reported being on an AM transmitter site, working late at night and suddenly hearing John Peel’s voice coming out of the chain link fence surrounding the site. I’d always thought that was due to the chain link fence somehow demodulating the AM signal and vibrating (handwave *physics!*).

It’s not the radio wave causing the sound. The antenna is being positively/negatively charged hundreds of thousands of times per second in order to produce the radio waves. Because the grass is just a bag of salty water, when it is put in contact with the antenna, it will begin to exchange charge with it. This is an AC current. Grass has a relatively high resistance so will heat up when AC current passes through it. This heat causes water to vaporise, and the rate of vaporisation will depend on the amount of AC current. The current is proportional to voltage, which is being modulated by the radio station to allow radios to reproduce sound waves corresponding to music.

3. Tim Bray thinks Google has stopped indexing older parts of the web, making it harder to find old posts from smaller sites. It prompted me to try out Million Short, a search engine that lets you remove up to the top 1 million sites from your query. If you try something like ‘london fish restaurants‘ it’s not bad. Gone are (most of) the roundup sites, top 10s from newspapers, Yelp, Tripadvisor, etc. Instead, you just get a load of, y’know, fish restaurant websites. And sometimes that’s what you want.

5. Ursula Le Guin has died, aged 88. Matt (everyone on the internet is called Matt) linked to her essay, ‘A Rant About “Technology”‘ which I’d not read before, and is superb.

I don’t know how to build and power a refrigerator, or program a computer, but I don’t know how to make a fishhook or a pair of shoes, either. I could learn. We all can learn. That’s the neat thing about technologies. They’re what we can learn to do.

If you can learn it, it’s a technology.

I’m sticking this up in the off chance it’ll turn up in someone’s Google search one day and save them some time or money.

If you found this you probably did what I did which was forget to turn off your NAD 315BEE amplifier. And then one night, at 3am, you woke up to find your speakers buzzing REALLY LOUDLY. Even when you put the amp into standby, which is odd.

The two large 10000μF smoothing capacitors have blown and need replacing. If you’ve got a soldering iron and stable hand you should be able to do it yourself.

If you’re in the UK RS stock these replacements which are the right specification and size. You can find guides on YouTube for how to swap them.

1. I’ve been enjoying noodling around with some electronics recently. One of the things I’m working on is converting a pair of beautiful old Bang and Olufsen CX50 speakers into an open source Sonos-esque multiroom audio system. I’m following HifiBerry’s guide for the hardware part, and in it there’s two 3D printed parts you need.

So I go on 3D Hubs, upload the two .stl files provided, get a quote, credit card, and now it’s printing somewhere in Farringdon. You still need to know whether you want PLA or ABS or whatever, but I was very impressed at how easy the whole thing was. Just another mundane e-commerce transaction. We’re out the other side of the hype cycle.

libpostal’s international address parser uses machine learning (Conditional Random Fields) and is trained on over 1 billion addresses in every inhabited country on Earth.

3. Mapzen funded libpostal, and loads of other brilliant geodata projects. Sadly they’re shutting down, but because it’s all open source the tens of £millions of value won’t be lost. Their migration guide walks through the alternatives to all their hosted services.

Aaron’s post about Who’s On First, the gazetteer of places, is a brilliant example of how to ensure an important project lasts beyond the lifespan of a single organisation or corporate strategy. Lots of loosely joined pieces, many easy to self or community host. Designing your project to be defended against the organisation that hosts it means designing that in from day one. 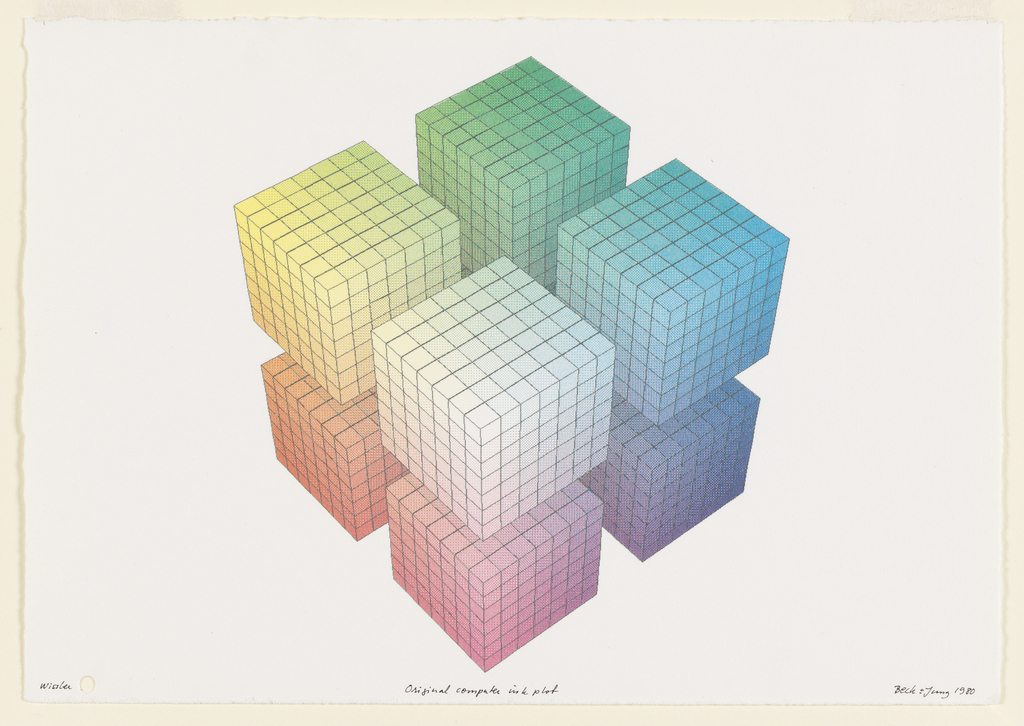 I turned my silly post about generating village names using a neural network into @urnowentering, a silly Twitter bot. It’s the gift that keeps on giving, procedurally, forever.

This is the most important thing. Give Jason some money. You want to live in a world where people like Jason can make a living writing on the internet. The way to get that is to give him some money. 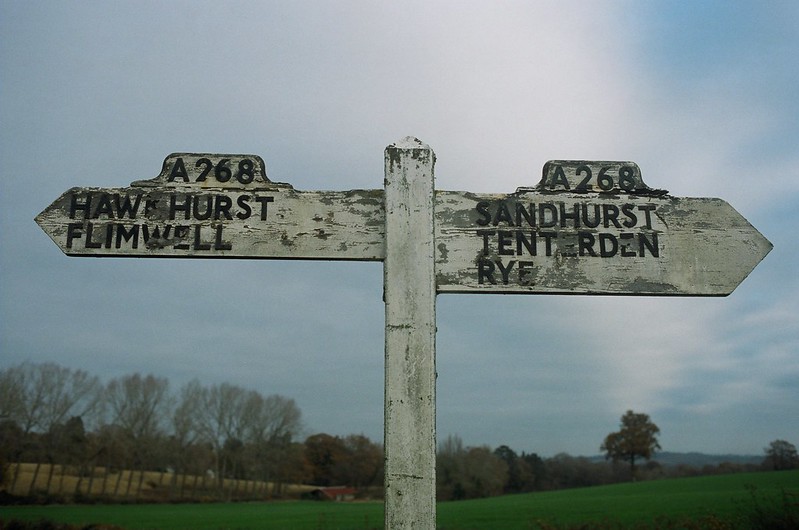 I’m trying to wrap my head around the new generation machine learning tools: deep neural networks and the like. It feels like this technology is approaching where databases were 20-30 years ago: the tooling is getting easy enough that an idiot like me can have a stab at wiring something up, even if I don’t quite understand all the magic incantations that I need to type. And it’s pretty clear it’s going to be important.

The world seems to be settling on Tensorflow, for now, so I had a go at getting something stupid up and running. I ended up making an English village name generator, using a corpus from OS Open Names (with a healthy amount of awk and grep), and a character level recurrent neural network written in Tensorflow.

Like I was with SQL many moons ago, I think I understand some of the principles, what’s possible and what’s not, and I can make sense of someone else’s code – but it’s a bit of struggle getting all the words in the right order when I have to change anything.

Anyway, the results are quite fun – here’s 20 of them:

Update: I turned this into a Twitter bot, @urnowentering.

I’ve used Jason Kottke‘s Stellar for a couple of years now, and love it. If you’ve never tried it, it’s a stream of things your friends are favouriting, mostly on Twitter, but YouTube, Vimeo and other stuff too.

To plug the gap, I’ve made a little thing called FaveJet, and you can have a go if you like.

Running this type of thing is hard. Pulling down everyone’s favourites every 30 mins and reconciling them into an activity stream is intensive as websites go. It seems fine for the 40 people using it at the moment, but it’ll look quite different at a thousand or five thousand.

But I’d like anyone to use it, and I don’t want it to be beholden to the whims of me and my rare free time. I’d like to find a model to support it, that doesn’t involve emptying my pockets alone, or losing precious family time.

I’m not sure, but I’d like to find something that works, and hopefully an approach I can use to support other niche products in the future.

If you’ve got any ideas, you’d like to help or you’ve tried this in the past, please drop me a line.

Anyway, in the meantime, feel free to give it a go. It only works for Twitter at the moment, and I’ve capped sign ups to 20 per day for now. Happy faveing.

Went to Galloway a few weekends ago. Stayed in a treehouse. Typical. Amazing light though. 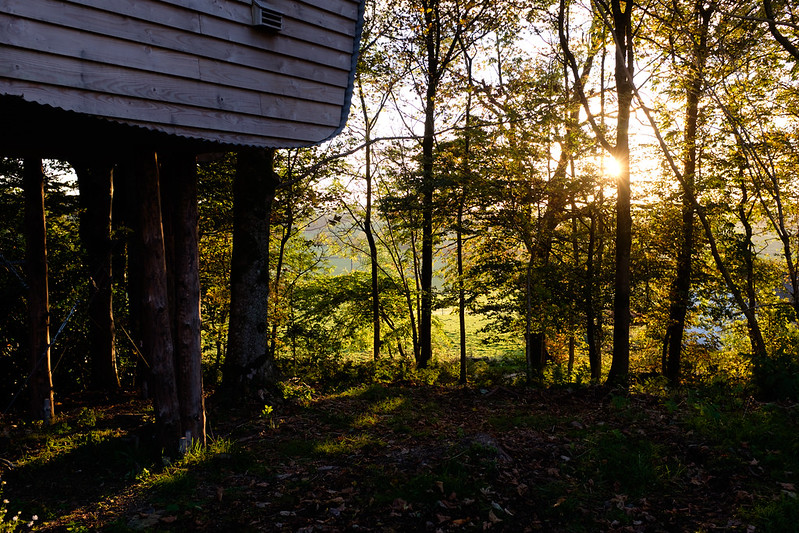 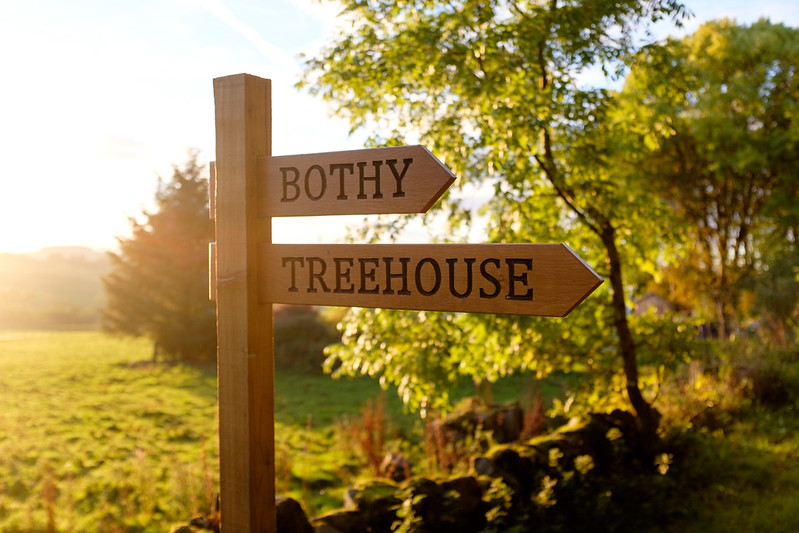 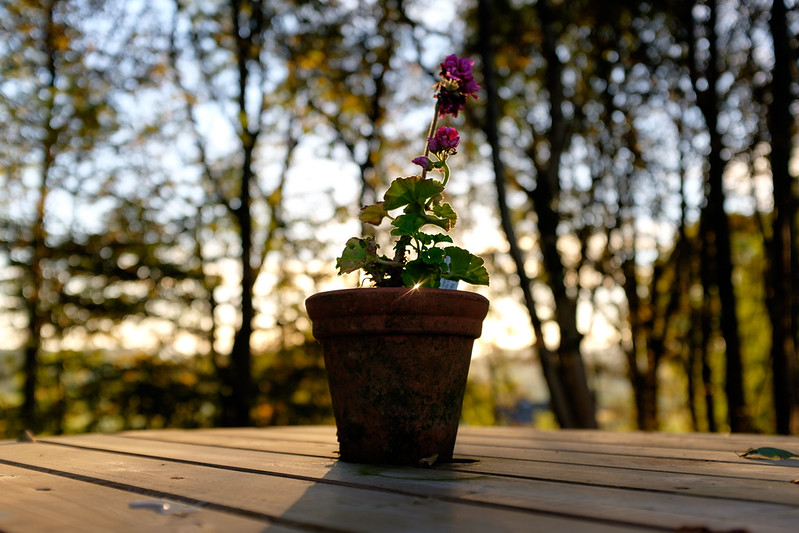 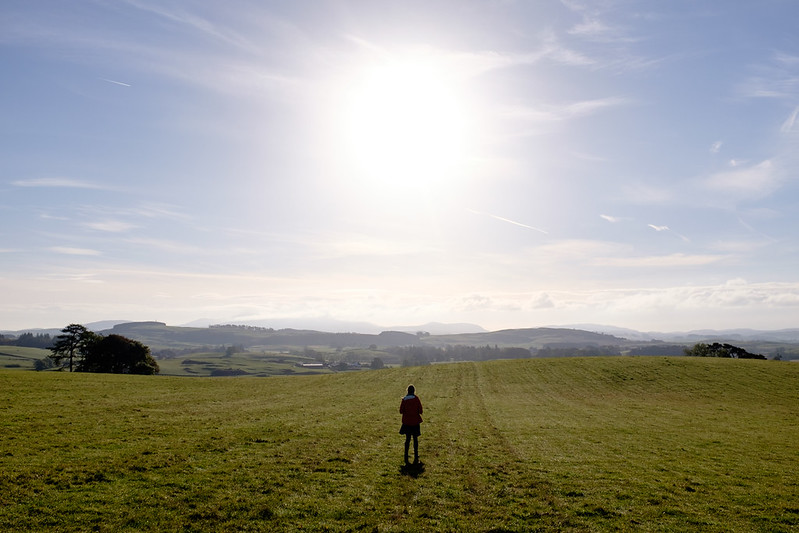 It’s been fun, hard work, with a wonderful team, backed by a great organisation. I joined to invent and launch some stuff, and the course is charted to do just that. The rest of the year will be busy as we ready for a launch, and then it’s time to hand the baton on.

I’m not sure what’s next yet. I’ve got a few days spare before Christmas, and from January I’m looking for the next thing(s). So, if you think you need some product invention/prototyping/engineering/reckons, drop me a line.

I went to the Six Day at the Olympic Velodrome this week. Great atmosphere, lots of fun.

They’ve gone full Wipeout with it all. A DJ from Ministry of Sound watching the action and keeping tempo accordingly. Coloured flood lighting. Introducing all the riders one by one as they do laps. Very little hanging around between events, and you mostly knew what was going on.

And whoever had the Derny riders come out to Ride of the Valkyries deserves a bonus. 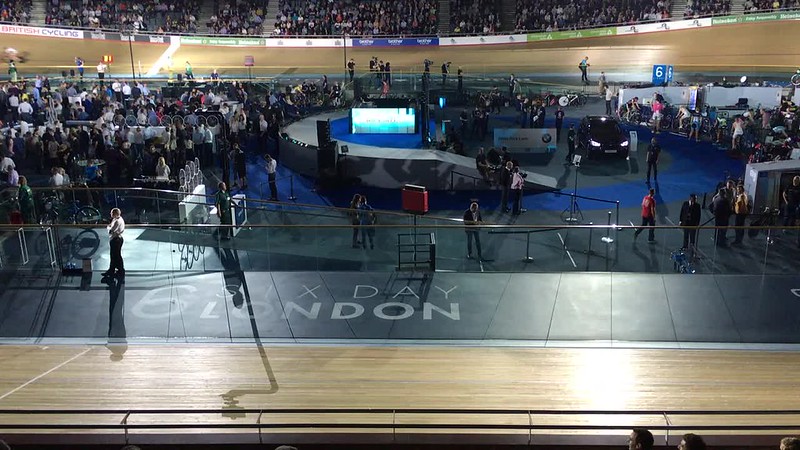 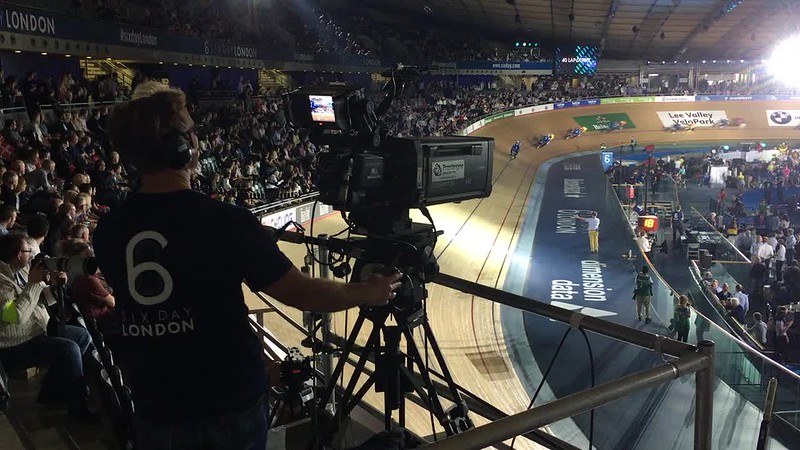