The observation deck in the Shard is opening tomorrow, so you'll see lots of photos from the top, if you haven't already.

I was lucky enough to have an opportunity to go round while the building was still being finished, with Ben, Chris and Russell, on a tour with one of the friendly civil engineers.

It's been a while (September 2011), so here's the bits I remember, and probably some facts I've exaggerated in the pub since then. 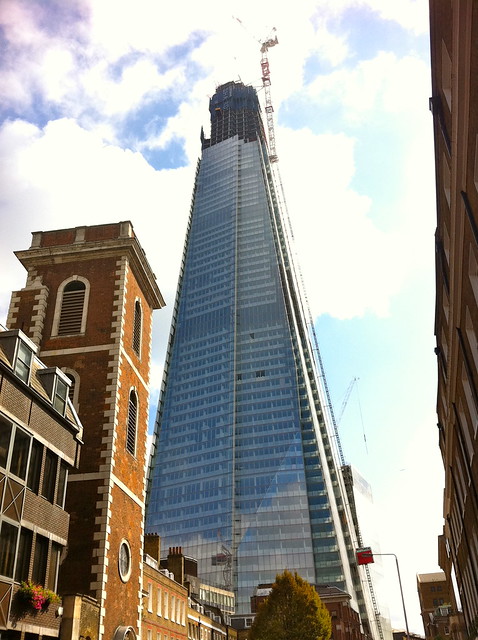 We went through fingerprint security and took the lift up the 50-something floor, where all our phone reception promptly stopped working. Too much signal? Too little? Regardless I laughed at the thought of buying a $25m duplex apartment and not getting any texts. Sadly, I'm sure they've fixed it by now.

Here, some brave fellas were fitting the glass windows to the outside of the structure. It's windy up there. I could barely watch, let alone take this photo. 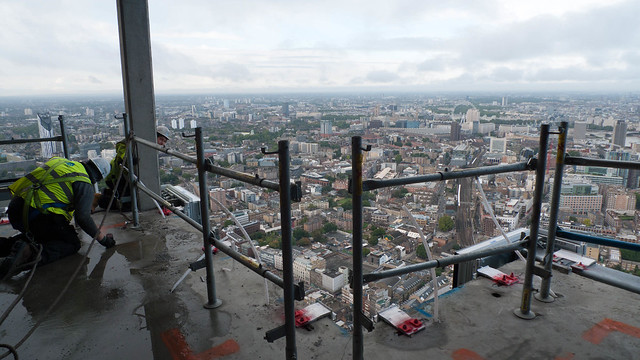 It's a cliché, but London really does look like a map beneath you, more compressed than you expect. 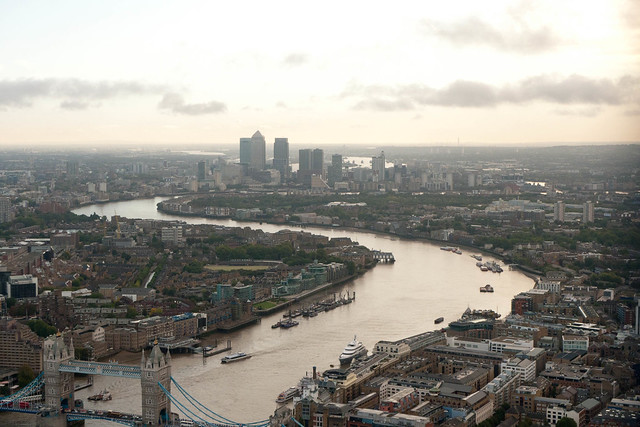 Here's a photo from the ground: 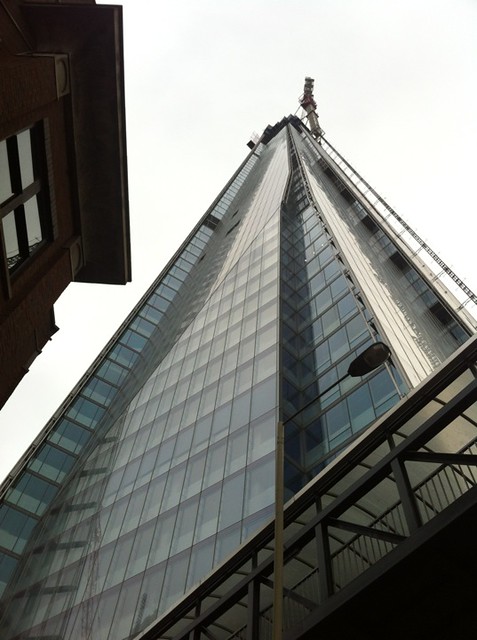 Do you see that little platform jutting out near the top on the left side of the building? It's a loading platform, used to land materials from the cranes. It's cantilevered against the floor and ceiling of that level, so it can be removed later. I think it's on the 62nd floor. 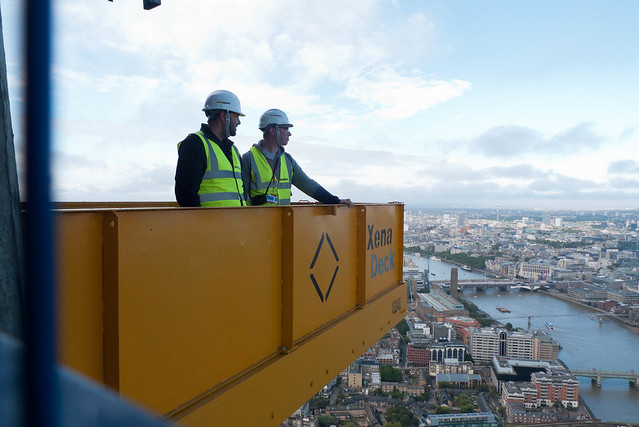 And the view below: 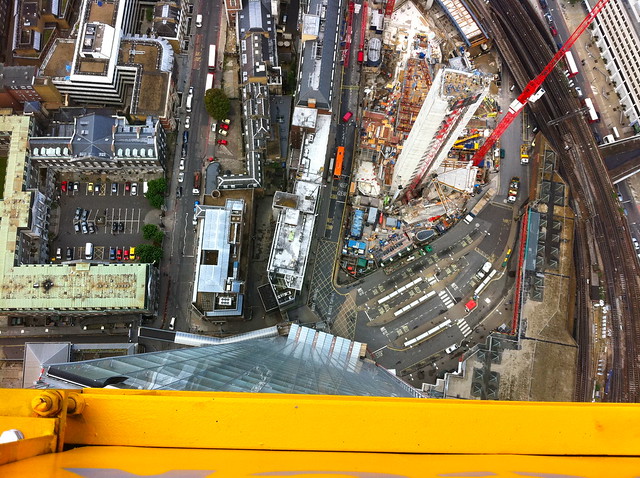 Now, I'm pretty comfortable with heights, but at that point my lizard brain kicked in. I couldn't stay on the platform for long. 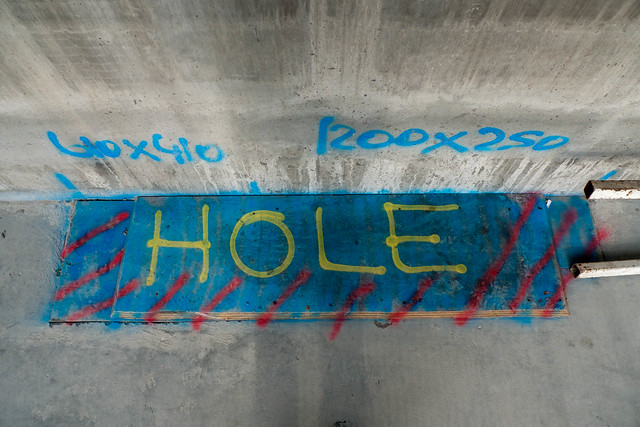 The lift hadn't been fitted all the way to the top then, so we clambered around the husk of steel girders and concrete floors, through puddles and piping, all the way to the 72nd floor, which is now the top floor of the observation deck. 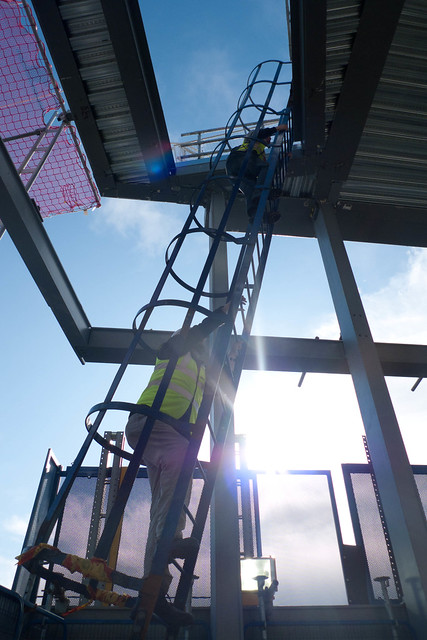 That's Chris and Russell climbing from floor 71 to 72, on the north east corner of the building.

The building is supported on an internal concrete column. Concrete is poured into a frame, and as it sets, the frame pulls itself up on the concrete that just dried. The concrete column stops at the 72nd floor, as the building narrows and there's not a lot of usable floor space left, the next 10 floors are hollow space to give it the building its shardiness.

Our guide said that on a clear day you can see from the south coast to Norwich cathedral. It's a good pub fact, but seems a bit far to me. Still, I use it from time to time. Seems silly not to.

And finally, the view from the top: 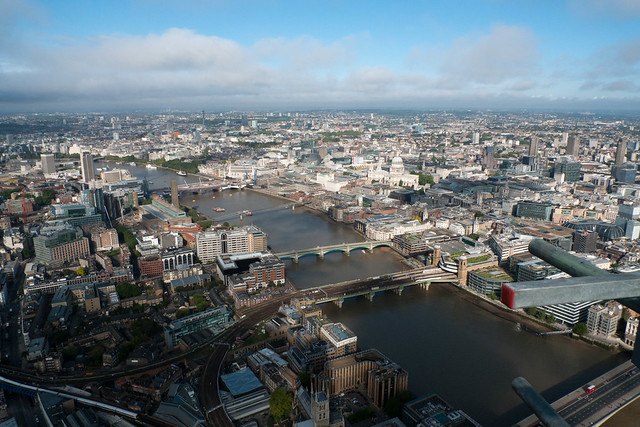 It was a brilliant day out. More photos on Flickr.