I've used Jason Kottke's Stellar for a couple of years now, and love it. If you've never tried it, it's a stream of things your friends are favouriting, mostly on Twitter, but YouTube, Vimeo and other stuff too.

To plug the gap, I've made a little thing called FaveJet, and you can have a go if you like. 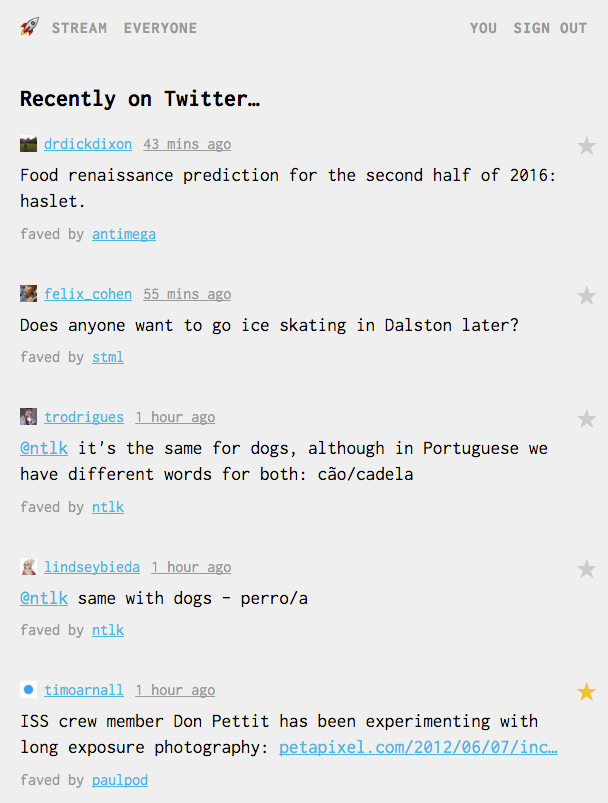 Running this type of thing is hard. Pulling down everyone's favourites every 30 mins and reconciling them into an activity stream is intensive as websites go. It seems fine for the 40 people using it at the moment, but it'll look quite different at a thousand or five thousand.

But I'd like anyone to use it, and I don't want it to be beholden to the whims of me and my rare free time. I'd like to find a model to support it, that doesn't involve emptying my pockets alone, or losing precious family time.

I'm not sure, but I'd like to find something that works, and hopefully an approach I can use to support other niche products in the future.

If you've got any ideas, you'd like to help or you've tried this in the past, please drop me a line.

Anyway, in the meantime, feel free to give it a go. It only works for Twitter at the moment, and I've capped sign ups to 20 per day for now. Happy faveing.