A Thing to Think At

One of the things I've been enjoying the most about the Olympics and Paralympics are the live streams put out by the Olympic Broadcasting Service, on digital TV and online.

The pacing is wonderful, without the pressure to fill every second with action. A few minutes of sport; some cheering; a minute or two of stadium murmur and shuffling; a few minutes of medal ceremonies: proud athletes, whatever that synthey Olympic background music is, a national anthem; then more shuffling, this time with a distant entertainer buoying the crowd; a bit more sport; repeat.

The commentary is light, and only when there's actually something to comment on. In between the action the video is slow, with wide panning shots of the venues, and the audio soft, distant, ambient.

To me it feels less like broadcast television, and more like inviting a bit of the stadium, velodrome or aquatic centre into your life for a few hours. Sports Hurtigruten.

They're places full of buzz and excitement, but I think I'd like to watch and listen to something more mundane, but equally interesting (to me): the road I grew up on, the Bristol to Bath cycle route, Denham airfield, or the A431.

One of the things I remember doing online with any quasi-regularity was watching the Hawaii Traffic Cameras online. It was just astounding to me. It's on the other side of the world! It's midnight there! The roads are so wide! I think it made me realise all the trivial things the web made possible, and the massive interconnectedness of it all. It seemed important at the time anyway.

Russell wrote something (I can't find it, sorry) a while back about turning CCTV into something a bit less weird. I'm probably not remembering this right, but he wondered what it'd be like if there was a mechanism for the camera operator to not just watch, but to communicate back. Maybe you could ask the CCTV operators to keep score in a game of football, or to keep an eye on your bike.

That's fun, and a nice way to rebalance to odd power relationship around CCTV, but I'd like to suggest something else. I'd make it a law that all CCTV cameras pointing at a public place must have a publicly accessible live stream available online.

For a start, it'd be a amazing resource to build useful things with. Quite astounding — but that's another post. But also it'd make it possible to invite a million street corners, parks, libraries, roads, railway stations into your life for a little while.

I'll concede that could seem weird, but I don't want it to be like a vigilante or reality TV thing. I'd like it to be more like staring out of a cafe window: a thing to think at, something to unfocus on.

Like the Goodyear blimp circling over our house, I'm going to miss these live streams when it's over. 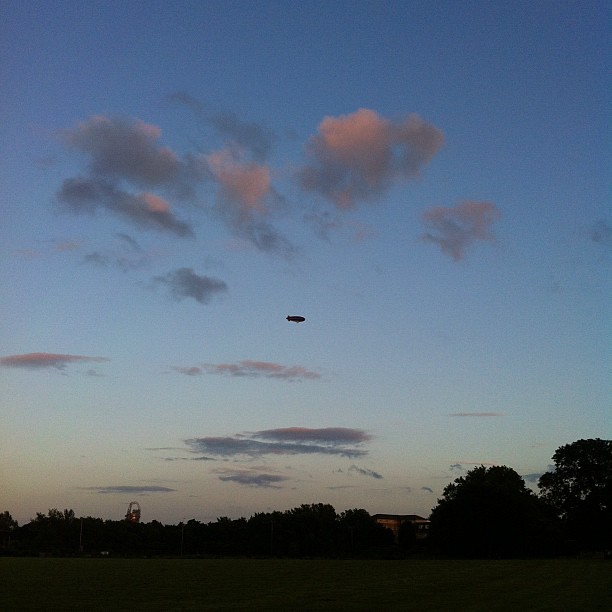